ED loves kittens and I made this game for her to practice her doubling.  It’s a pretty straight-forward game. Just roll the die, double the number and move the token up one space. This doesn’t have to be a competitive game… the players just guess which kitty is going to win the game. (I drew all these kitties — not professional by any means but ED likes them and the fact that I made the game for her!)

You Need: You need to make a die (on a wooden cube) that has the numbers 5 through 10. Gather 6 tokens to place on the board. [In the photo below of ED playing the game, she set two animals on the #12 space for some reason… they just moved together!!]

To Play: Each player takes a turn rolling the die. Double that number and move the token one space closer to the kitty. When the token reaches one of the kitties, that kitty has won. I put this game out on the dining room table on Friday morning (see the cereal there on the right?!)… and wouldn’t you know… ED practiced 50 math facts by the time she was done eating! Her favorite kitty was pepper (the black one with the big eyes 2nd from the left because it’s a copy of one of her stuffed animals-funny enough because that one’s my least favorite drawing. I’m not a big fan of those HUGE-EYED stuffed animals!) Explaining Long Division with Kitty Place Value Cards: You can download a set of free kitty place value cards (be sure to print 2 sheets per page) from this blog post. I used them both for place value work with my kindergartner and for explaining long division for my 3rd grader. Clock and Time Activities: And links to the printable we used 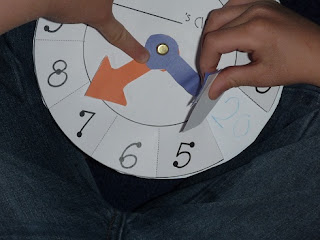 Free Daily Calendar Page — In this post I shared some of the activities ED did with the lapbook on the days of the week, months of the year and the daily calendar page I made for her. Doubling with Pete the Cat: Addition Board Games (sums that equal 13 or 14): The Great Pet Races Finally here is a link to all the math posts. You’ll find other freebies I’ve made as you scroll through those old posts.
See you again soon here or Homeschool Den Facebook page. Don’t forget to Subscribe to our Homeschool Den Newsletter! ~Liesl
Please like & share:
addition gameDoubling Gamefree kindergarten math game